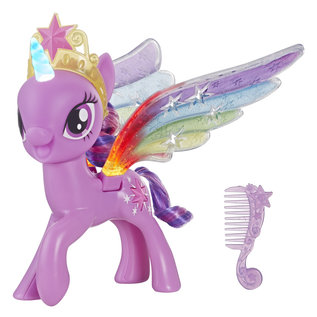 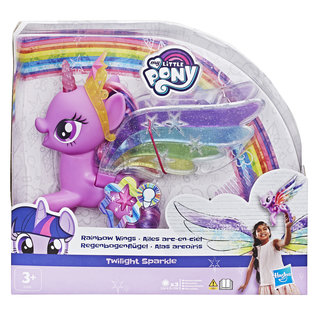 My Little Pony Toy Rainbow Wings Twilight Sparkle - Purple Pony Figure with Lights and Moving Wings, Kids Ages 3 Years Old and Up: ENTERTAINMENT-INSPIRED: 8-inch Twilight Sparkle pony figure with rainbow wings inspired by scenes from the My Little Pony: Friendship is Magic TV show. LIGHT-UP FEATURES: Push the purple pony figure?s signature character cutie mark to see her unicorn horn and wings light up with 3 multi-colored LED lights. MOVING WINGS: Hold the Twilight Sparkle figure and move her up and down to see her rainbow-colored wings flap. Her horn and wings glow when kids make her wings flutter! PRINCESS ACCESSORIES: She comes with a glittery tiara accessory and a comb for brushing and styling her beautiful rooted pink and purple princess hair. AGES 3 YEARS OLD AND UP: This My Little Pony toy with lights and wings that kids can make move is a great gift for 3 year old girls and boys and older.

Twilight Sparkle represents the Element of Harmony “magic,” and she is an alicorn princess, which is a pony who has both wings and a unicorn horn. Imagine her soaring through the clouds above Equestria with the Rainbow Wings Twilight Sparkle pony figure! This 8-inch purple pony figure has gorgeous rainbow wings inspired by scenes in entertainment. Push her signature cutie mark of pink and white stars to see her unicorn horn and wings light up. Her rainbow wings also flutter while holding and guiding her up and down to pretend she’s flying. When her wings flutter, they light up too! She also comes with her signature princess tiara and a comb for brushing and styling her rooted purple mane and tail.

Twilight Sparkle uses her colorful wings to fly above Equestria, spreading the magic of friendship wherever she goes. Product dimensions are 8 inches by 8 inches.