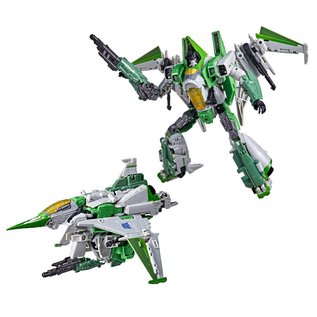 This Transformers Studio Series Voyager Transformers: Bumblebee Thrust figure converts from robot to tetrajet mode in 31 steps. Remove backdrop to showcase Thrust in the Cybertron Falls scene. In the Cybertron Falls scene from Transformers: Bumblebee, the Autobot resistance retreats to escape the planet as Cybertron falls under Decepticon control. Thrust and his fellow seekers destroy the Autobot launchpad in an effort the prevent their escape. Pose the figure out with the included Null Ray accessories and imagine recreating this classic movie moment! Ages 8 and up.